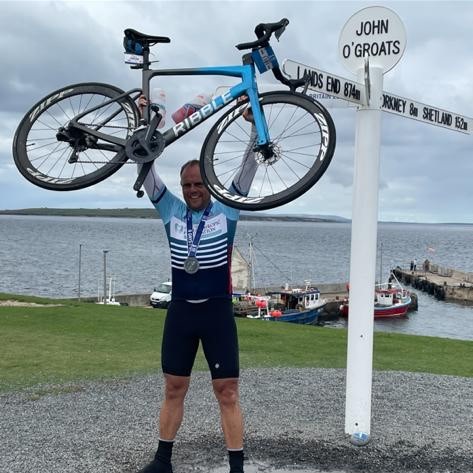 Nine long days away from his family; cycling over 100 miles a day, cold nights spent alone in a tent and a nasty collision with the back end of a hatchback didn’t stop Active’s Paul Gibson completing the gruelling Deloitte Ride Across Britain and raising a staggering £6,575 (so far) for local charity The Middlesbrough & Teesside Philanthropic Foundation (MTPF).

Kicking off at Landsend on Saturday 4th September, Paul completed day 9 – the final leg of the Ride from the Kyle of Sutherland to John O’Groats on Sunday 12th, with an eye watering 980 miles under his belt.

“I’ve loved it,“ said Paul of his final day.

“The views were breath-taking and you feel as if you are cycling to the end of the world.”

Paul was making great progress and feeling strong until day the end of day 3 when a car in front of him braked suddenly and he was thrown across it, landing on his face.  He bravely battled on though, despite being very shaken up and with damage to his hand and face.

“I’ve healed really well and that’s thanks to the medics and sports physios on the event,” said Paul.

“Everything was going great until the accident on the Monday evening. By Tuesday morning I honestly didn’t think I could carry on with the ride”.

“But the encouragement and support from so many people; not just other riders, but so many messages of support from people back home via Twitter and LinkedIn gave me the push I needed to battle on”.

Paul’s love of cycling began in 2015 when he and some other members of the Active team took on the ‘Coast to Coast’ challenge, raising more funds for the MTPF.  Six years (and several charity rides) on and cycling is a huge part of Paul’s life.

Paul chose the MTPF as benefactors, not only because the firm are charity patrons, but because he has seen first hand the devastation caused to the people of Teesside in the last 18 months due to the pandemic.

“I sit as a governor at a school in Middlesbrough and I’ve seen how bad things are,” says Paul. “Supporting the foundation is the best way to get the money to the heart of the community and to those who need it the most”.

The charity’s aim is to make Middlesbrough and Teesside better places in which to live, work and do business; the recent focus has been supporting the local charities and community groups who have dedicated their efforts to helping those fighting to keep their ‘heads above the water line’ during the Covid crisis.

“This challenge has taken me to some very dark places” said Paul “but I’ve learnt so much about myself. The mind can do amazing things when the body is suffering.”

Thanking his sponsors and supporters, Paul added: “My challenge is done and I hope you enjoyed following the journey”.

“Thank you all for the support you have shown and the donations you have made, it is massively appreciated”.

Lee Bramley, Chair of Trustees at MTPF said “Paul has always been a big supporter of the charity, but we are truly overwhelmed by the amount that he has raised – the money will help so many vulnerable people in our area”

Click here to purchase a cycling jersey (thank you)