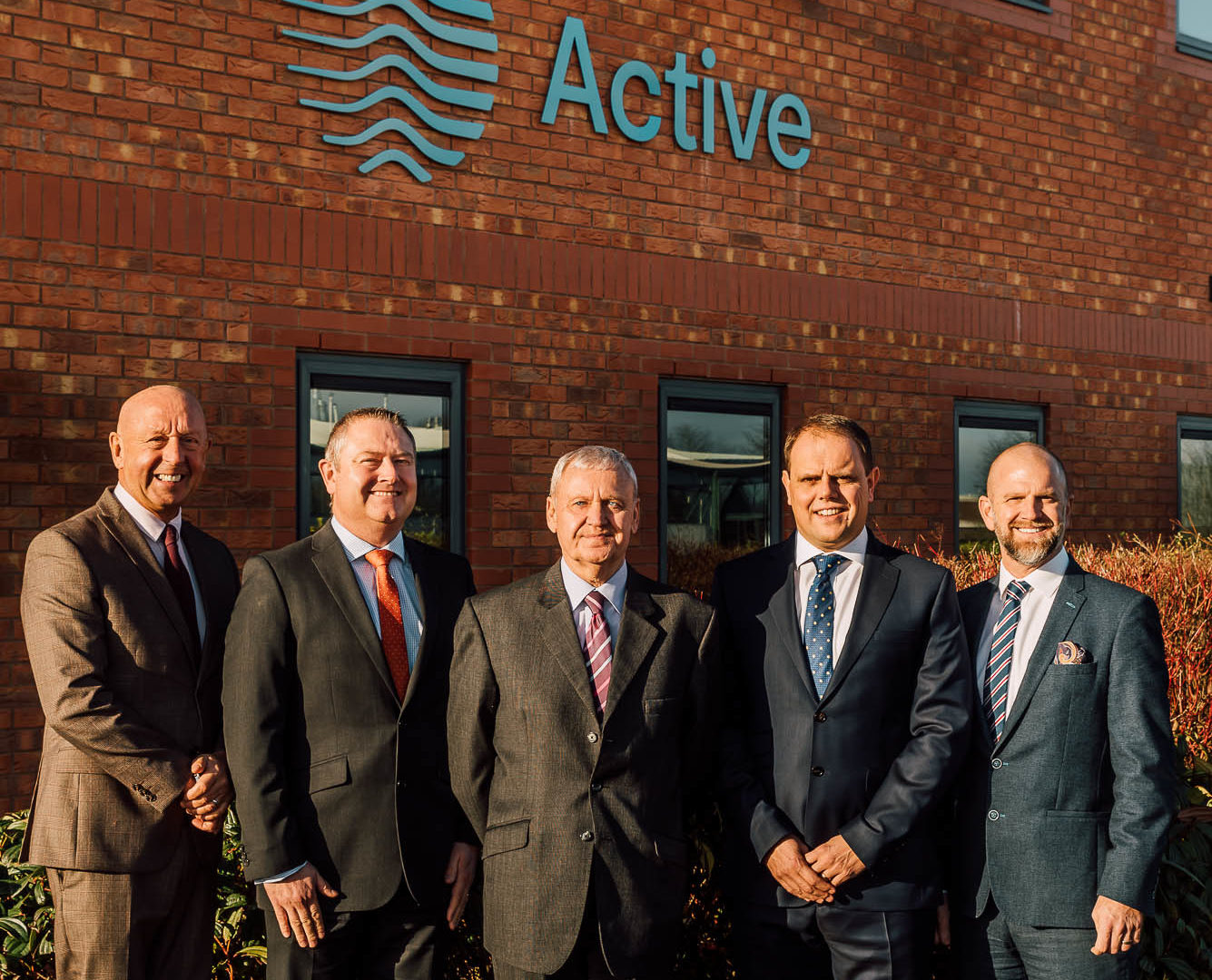 The story so far, as told by MD Karl Pemberton.

Whilst away on holiday last week, I realised that it had been 20 years since Active was established by my father, Glyn Pemberton (pictured centre, above).

Lying in bed, wide awake one morning, it got me thinking about his journey, and our journey over those 20 years, and how we became to be as we are now. None of it has been easy or straight forward, and I don’t expect the next 20 to be either, no matter what it may sometimes look like from the outside.

The year 2000 was supposed to be the year when planes would fall from the skies, or more scarily, our VHS recorders would not be able to flick over from 1999 to 2000 and record things beyond 31st December!  The Millenium Bug was a real fear, but today we look back and chuckle. It was nothing compared to what was still to come.

2000 was also the year that the business my father had successfully worked in for 14 years closed its doors for the final time.  Having looked after many clients for many years in our industry, what was he to do next?  Find a job or start a business of his own?

Having never run his own business, he took the bold decision – and a leap of faith – to go it alone, and established Active Financial Services Ltd (as we were at birth). D.O.B. 25th July 2000.

I was 22 at the time and working at Yorkshire Bank; I clearly recall the stress this put on my family, in particular the financial pressures of re-mortgaging and ultimately ‘downsizing’ our family home as income levels substantially reduced.

Anecdotally,  I remember the conversations around choosing the name. Back in those days, it was all about how high up the listings you were in the Yellow Pages, so it had to begin with an ‘A’! There were no well thought through branding exercises like we have seen in recent years; in 2000, it was much easier, or we were far more naïve. Thankfully, Active was chosen, and today it resonates brilliantly with who we are and what we do. It’s also now quite a pertinent word within financial services, as many investment portfolios are known to be ‘Actively Managed’.  Thankfully, we didn’t opt for Aardvark Financial (to gain top spot in the directories) as I don’t think it would work as well in today’s world.

Active’s early years were fairly simple. Do what had worked for many years before. Remain independent, remain ‘holistic’ – dealing with all areas of financial planning – and remain 100% morally skewed towards client needs. This had served my dad very well for many years, and if it isn’t broken, why try to fix it?

The problem was that in the early 2000’s, technological and regulatory developments were advancing at such a pace. My dad was in his 50’s at this time, and he would be the first to admit that ‘tech’ (as we call it now) was not his focus.

Active’s greatest challenge however came in late 2004 when my father was rushed into hospital for emergency surgery. 24 hours earlier he had been eating his Sunday dinner, but by the Monday lunchtime he was on life support, where he remained for almost 3 months. We were initially told by the medical professionals that it was food poisoning.  However, it quickly transpired that his bowel had burst, placing him in mortal danger.

This was a torturous time for the entire family. Not knowing from one day to the next whether he would survive, his body was literally shutting down through septicaemia, and all we could do was be with him and watch. The agony was further compounded for my mum with the financial worry of ‘how will I pay the bills?’. and ‘what will happen to the business?’

It was all extremely surreal, but thankfully we had the help and support of Colin Burke (who is still an Independent Financial Adviser at Active today) – one of my dad’s good friends and a colleague for many years – who stepped up to help keep Active operational throughout this difficult period. My brother, Mark, who was the Finance Director for a large international company, and myself, still at Yorkshire Bank, also took time out of our respective roles to step in and help keep the business trading.

It was a strange experience for us both as this was our first look ‘under the bonnet’ so to speak, having only been involved from afar previously, only knowing what we knew from what had been spoken about around the family dinner table.

It was clearly a world away from the ‘corporate’ experience we had both been used to in our careers, yet also scary when my dad’s loyal clients kept saying “it’s ok, we’ll just wait for your dad to come back before doing anything”. “Nooooooooo!” was our response, “we need you to continue using us, not waiting”. Like many businesses and households, bills still needed to be paid & staff still needed to be paid. They couldn’t wait, and therefore income still needed to be generated.

It was the biggest back handed compliment in all seriousness, yet it was also the biggest business model flaw. The business was in theory ‘my dad’, and if he wasn’t there, there was no business. Scary to think that a role that he had dedicated his life to for over 20 years was technically worthless without him.

Something needed to change, and thankfully it did.

First and foremost, as many of you will know, my dad did make a miraculous recovery. Thanks to the expertise of the medical practitioners at James Cook Hospital and the clean-living religious lifestyle he had lead throughout his life, he was back on his feet (albeit tentatively) after about 6 months.

After some time, it was clear that he wouldn’t have the strength to continue as before, and in late 2006, I was offered the opportunity to join the family business and leave my career in banking, having only recently moved over to RBS.

I ultimately joined in mid-2007 with a vision of what could be achieved, little did anyone know that a major financial crash was just around the corner.

We had the opportunity to develop a ‘best of all worlds’ approach to financial planning in that smaller family practices were often independent, extremely moral, personable, and client focused. Yet they often struggled to develop a brand, processes and systems capable of attracting those currently employed by, or clients using the larger providers – exactly the background I had been used to.

It all felt great to begin with, and our plans for evolution were in full flow when the inevitable next challenge hit.

Having been joined by my good friend and now business partner Paul Gibson in early 2009, we had to choose whether we continued in our new direction, or take the easy step of going back to ‘what we knew best’.

We held our breath, had faith in our model, and conviction in the purpose of our development. It was daunting, but ultimately it worked. At a time when many of our competitors retreated to their bunkers, we continued to beat the drum about our different, and rather fresh approach.

At the time, it was like being on a motorway with very little traffic!

Looking back, this was the best decision we ever made. The easy option would have been to revert to type, consolidate, and wait for calmer waters. The outcome was an industry where great employers were shedding great staff. Clients of larger, more ‘secure’ organisations were seeking alternative options as the ‘Banks’ (generally), were not seen as the ‘safe option’ as they had been previously.

But where would these people go? Who could they join? Who were one of the only firms still ‘beating the drum’? – by a pure stroke of luck, it was Active!

In 2012, a move to more suitable premises was on the cards. One that reflected the firm we had now become, and one that would ultimately allow the firm to continue to develop for many more years to come. Active House would give us a footprint, equal to that of our fellow friends and peers in other business support services such as Law Firms and Accountancy Practices. Those that have known us for a while will know that these years were the catalyst to what you see before you today.

Combined, we believe that all of the above leads to delivering market leading client service that is hard to replicate– or at least this is our hope!

What I do know for certain though is that our experiences of the last 20 years have given us the strength, substance and understanding to get through recent Covid related turbulence. Our journey has certainly had its fair share of ups and downs, and had we not invested as we had, when we did, I’m sure that we would not have fared as well as we have.

Finally, I also know that Active is now not reliant upon one single person, and that although now officially retired, my dad’s legacy can live long for many more years to come while he enjoys a well deserved retirement.